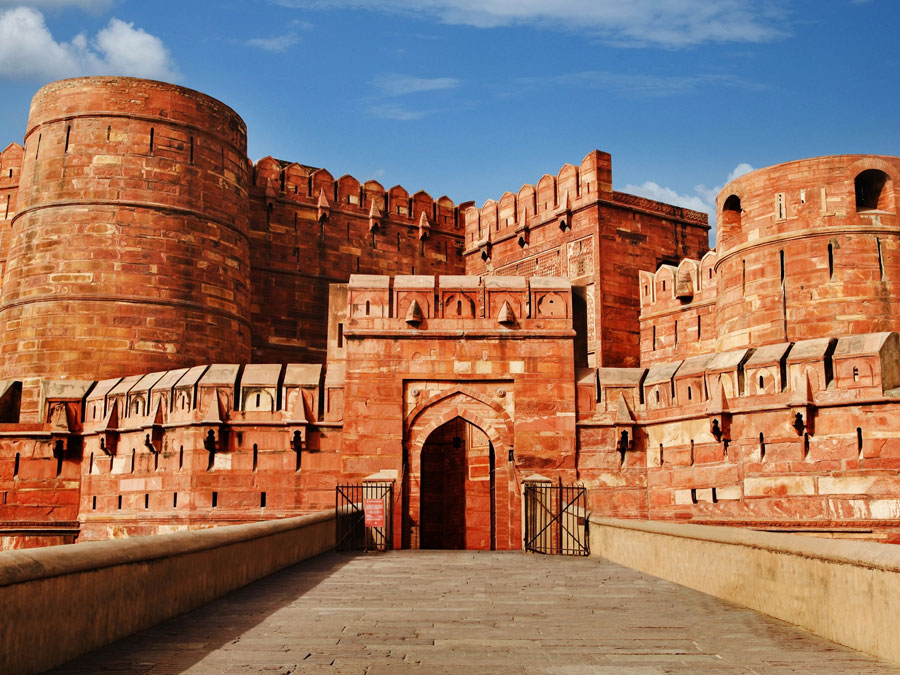 Agra (The Taj Mahal City) is a city in the northern state of Uttar Pradesh, India. Its located at the banks of the river Yamuna, 363 Kms west of the state capital of Lucknow and 200 Kms south from the national capital of New Delhi.

The City finds mention in the Epic Mahabharata where is was called Agrevana, or the border of the forest. Legend describes the founding of the city to Raja Badal Singh (around 1475), whose fort, Badalgarh, stood on or near the site of the present fort. However the 11th century Persian poet Mas’udSa’ d Salman writes of a desperate assault on the fortress of Agra, then held by the Shahi King Jayapala by Sultan Mahmud of Ghazni, Sultan Sikandar Lodi was the first to move his capital from Delhi to Agra in the year 1506. He died in 1517 and his son Ibrahim Lodi lived there for nine years, ultimately losing the battle of Panipat in 1526.

It achieved fame as the capital of the Mughal emperors from 1526 to 1658 and maintains a major tourist city destination because of its many marvelous Mughal Era buildings such as Taj Mahal, Agra Fort and Fatehpur Sikri all three of which are selected as UNESCO WORLD HERITAGE SITES.

A pleasant town with comparatively slow pace, Agra is known for its superb inlay work on marble and soapstone by craftsman who are descendants of those who worked under the Mughals. The city is also famous for its carpets, gold thread embroidery and leather shoes.

Taj Mahal is one of the most famous buildings in the world, the mausoleum of Shah Jahan’s favorite wife, Mumta Mahal. Its is one of the New Seven wonders of the world, and one of three World Heritage Sites in Agra.

Taj Mahal was built by the Mughal king Shah Jahan as the final resting place for his beloved wife, Mumtaz Mahal. Finished in marble, it is perhaps India’s most fascinating and beautiful monument. This perfectly symmetrical monument took 22 years (1630-1652) of labour and 2000 workers, masons and jewellers to build and is set amidst landscaped gardens, Built by the persian architect, Ustad Isa, the Taj Mahal is on the bank of the Yamuna River. It can be observed from Agra fort from where Emperor Shah Jahan gazed at it, for the last eight years of his life, a prisoner of his son Aurangzed. It is an acknowledged masterpiece of symmetry. Verses of the Koran are inscribed on it and at the top of the gateare twenty two small domes. The Taj Mahal was built on a marble platform that stands above a sandstone one. The most elegant dome of the Taj Mahal has a diameter of 60 feet and rises to a height of 80 feet directly under this dome is the tomb of Mumtaz Mahal. Shah Jahan’s tomb was erected next to hers by his son Aurangzed. The interiors are decorated by fineinaly work. Incorporating semi precious stones.

The Taj Mahal is open from 6:00 AM to 7:30 PM every day except Friday. Entry costs Rs 250 (plus levy of Rs 500) for foreigners and Rs 20 for Indians. Plan to visit the Taj at least two different times during the day (morning and evening at best) as soon as possible to defeat the crowd, and to experience the full effects of sunlight on the amazing building. Are). It is also completely stunning under a full moon. To buy tickets, you can go to the south gate, but this gate is 1 km far away from the entrance and the counter open at 8:00 AM. At the west and east gate, the counter open at 6:00 AM.

Agra fort is similar in layout to the Red Fort in Delhi, but considerably better preserved, as much of Delhi Fort was razed by the British after the Mutiny. As much as palace as a defensive structure, it is also constructed mainly from red sandstone.

Agra Fort was commissioned by the great Mughal Emperor Akbar in 1565, and is another of Agra’s World Heritage Sites. A stone bullet at the gate of the Fort states that it was built before 1000 but was later renovated by Akbar. The red sandstone fort was converted into a palace in Shah Jahan’s time, and was extensively worked with marble and pietra dura inlay. Notable buildings in the fort include the Pearl Mosque, the Diwan E Khas (halls of public and private audience), Jahangir’s Palace, Khās Mahal, Shish Mahal (mirrored palace), and theMusamman Burj.

You can get to the fort by Rickshaw from Taj Mahal for around 25-30Rs. Entry to the fort is Rs 250 (plus levy of 50 Rupees if you have not already paid the 500Rs fee for Taj Mahal).

The Empress Nur Jahan built I’timad Ud Daulah’s Tomb, sometimes called the ‘Baby Tāj’, for her father, Mirza Ghiyas Beg, the Chief Minister of the Emperor Jahangir. It is set on the left bank of the Yamuna river. It is the smallest if compared with many other Mughal-era tombs. It is sometimes described as a jewel box. Its garden layout and use of pietra dura, inlay designs, white marble, and latticework presage many elements of the Taj Mahal

Rambagh is the oldest Mughal garden in India, which was built by Emperor Babur in 1528 on the banks of the Yamuna. It is located about 2.34 km north of Taj Mahal. The pavilions in this garden are designed so that the air emanating from the Yamuna, combined with the greenery, keeps them cool even during the peak of summer. The original name of the gardens was Aram Bagh, or ‘Garden of Relaxation’, and this was where the Mughal emperor Babar used to spend his leisure time and where he eventually died. His body was kept here for sometime before sending it to Kabul.

The mosque at Sikri was the first structure to be built in 1571. The exterior is modest but the interior carries the most gorgeous ornamentation in the floral arabesques and ingenious geometrical patterns in brown.

The Mughal Emperor Akbar built Fatehpūr Sikrī about 35 km from Agra, and moved his capital there. Later abandoned, the site displays a number of buildings of significant historical importance. A World Heritage Site. It is often visited by tourists. The Mughal emperor Babur defeated Rana Sanga in a battle at a place called Sikri (about 40 km from Agra). Then the Mughal Emperor Akbar wanted to make Fatehpūr Sikrī his headquarters, so he built a majestic fort; due to shortage of water, however, he had to ultimately move his headquarters to Agra Fort.

Sikandra is the last resting place of the Mughal Emperor Akbar the Great and is on the Delhi-Agra Highway It is only 13 kilometres from the Agra Fort. Akbar’s tomb reflects the completeness of his personality. The vast, beautifully carved, red-ochre sandstone tomb with deer, rabbits and langurs is set amidst a lush garden. Akbar himself planned his own tomb and selected a suitable site for it. To construct a tomb in one’s lifetime was a Turkic custom which the Mughals followed religiously. Akbar’s son Jahangir completed construction of this pyramidal tomb in 1613. On the tomb, the 99 names of Allah are inscribed.