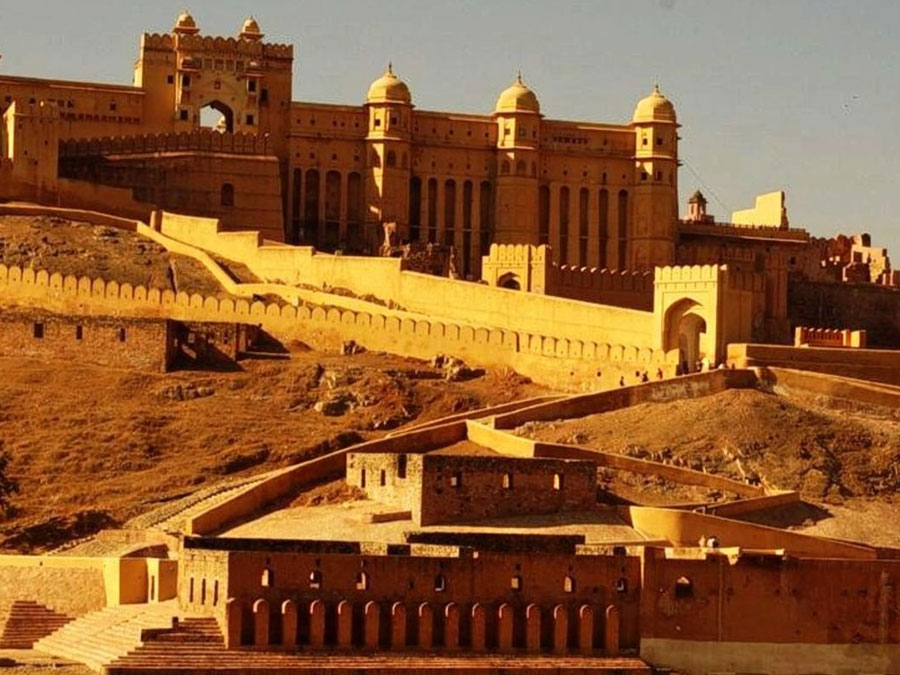 Jaipur is also known as the Pink City and is the capital of Rajasthan state in India. It was founded in 1727 by Maharaja Sawai Jai Singh II, a Kachwaha Rajput, who ruled from 1699-1744. Initially his capital was Amber city, which lies at a distance of 11 km from Jaipur. He felt the need to relocate his capital city with increasing population and increasing scarcity of water. The King consulted several books on architecture and architects before designing the layout of Jaipur. Finally under the architectural guidance of Vidyadhar Bhattacharya, (initially an accounting clerk in the treasury of Ambar and later promoted by the king to the office of chief architect) existed on the classical basis of the principles of Jaipur Vastu Shastra and similar classical treatise.

After waging several battles with the Marathas, Maharaja Sawai Jai Singh II was keen on the security aspect of the city. Being a lover of astronomy, mathematics and astrophysics, Jai Singh consulted Vidyadhar Bhattacharya, a Brahmin scholar of Bengal, to help him design several other buildings including the Royal Palace in the city center.

Construction of the city began in 1727. Major palaces, roads and squares took about 4 years to complete. The city was built according to the principles of Shilpa Shastra, the science of Indian architecture. The city was divided into nine blocks, two of which include the state building and the palace, with the remaining seven allocated to the public. The massive fort walls were built with seven strong doors. For the time, the architecture of the town was very advanced and certainly the best in Indian subcontinent. In 1853, when the Prince of Wales came to Jaipur, the entire city was painted pink to welcome him during the reign of Sawai Ram Singh. Today, the colors are pink in color, giving the city a distinct appearance. The city developed rapidly in the 19th century; By 1900, it had a population of 160,000. The city’s wide boulevards were paved and lit.

The City Palace is an important blend of traditional Rajput and Mughal architecture. It is a huge palace complex located approximately one-seventh of the Pink City. It was originally built by Maharaja Jai ​​Singh II. The complex is divided into courtyards, huge gardens and a series of buildings. It is home to several palatial structures like the Chandra Mahal (home to present Maharaja of Jaipur), Diwan-e-Khas (or Hall of Private audience housing the two largest silver vessels in the world, which are duly mentioned in the Guinness book), Mubarak Mahal (housing a textile museum), the gateway Ridhi Sidhi Pol (with four small doorways decorated with motifs depicting the four seasons), and the Diwan-e-Aam ( or Hall of Public Audience). Another integral part of the palace complex is Hawa Mahal, which stands away from the main complex. Entry fees with audio guide (all languages) and camera is Rs 300.

Jal Mahal also known as the Water Palace is on the way to Sisodia Rani Garden. A Rajput style architectured palace sits in the center of the Maan-sarovar lake. The lake is often dry in winter, but the summer monsoons often turn it into a beautiful lake filled with water hyacinth.

Jantar Mantar is the largest among the five astronomical observatories built by Maharaja Jai ​​Singh during the period 1727–1734 in North India. It is located very close to the City Palace. The observatory contains fourteen major geometric devices (or yantra in Hindi) for predicting eclipses, measuring time,ascertaining the declinations of planets,  tracking stars in their orbits, and determining the celestial altitudes etc. Boards and plates give elaborate explanations of the use of each device, and guides can be hired to provide much the same information in a more digestible format.

Hawa Mahal is also known as the Palace of breeze and was built in 1799 by Maharaja Sawai Singh as part of City Palace. It was an extension of the Zenana (women) chamber. It’s purpose was to allow royal ladies to observe everyday life in the street below without being seen. It is a five-storey high red sandstone structure, with more than 950 windows. Breeze (or Hawa in Hindi) passes through these windows giving the palace its name. Rs 50 is the entry fees along with camera.

Jal Mahal is 6km on the way to Amer. This small palace is located in the middle of Man Sagar Lake. A paved causeway leads up to the beautiful water palace.

Amber Fort, (11 km from central Jaipur).This massive fort-palace complex built in hybrid Hindu-Muslim style dates back to Raja Man Singh and was the royal palace of the Kachwahas from c. 1600 to 1727. The name has nothing to do with the rather pretty pastel yellow colour; instead, the fort is named after the town of Amber, in turn named after the goddess Amba. The main sights within the fort include the Sheesh Mahal, adorned with thousands on thousands of mirror tiles on the walls and ceiling. The fort/palace grounds are sprawling and have no signage whatsoever in any language, so it’s worth getting an audio guide or a real guide. It’s a bit of a hike up from the town, and the touristy thing to do is to hitch an elephant ride to the top (in order to get an elephant it is better to to arrive there in the morning, otherwise at midday the elephants are over. But the road that elephants pass is not so long). The elephant riding costs 900 (fixed government prices) as of July 5th 2011. The real guide will cost about Rs. 70-100 and will also take you to the Rajasthan Kala Mandir (a government operated shop) to buy souvenirs. Another thing not to be missed is the sound and light show in the evening from 7 to 8 pm. Amitabh Bachhan narrates the story of Rajasthani kings and the script is written by Gulzar. Cost is Rs. 100 per person and don’t forget to take the mosquito repellant. The light show can be watched from outside the fort but the sound won’t be audible from there. Rs. 10/50 Indians/foreigners, plus optional Rs.25/100 for still/video camera, Rs.100 for audioguide.

Jaigarh Fort was never defeated in battle and was considered the strongest of the three forts in the area. It is best known as the site of the world’s largest cannon, the Jaivana, which was test-fired only once. According to legend, despite using only half the design amount of gunpowder, the cannonball flew 35 km! A better reason to visit the fort, however, is the natural parks at the other end and the spectacular views of the Amber Fort and the hills around. The remains of the foundry where Jayavan (and many more) were dumped are also on the grounds of the fort. An autorickshaw can be taken to the top of the fort from the auto rickshaw stand in front of the Amber fort and a round trip will cost about Rs. 200. It is also a 20-40min walk from bottom of Amber palace entrance (take the elephant’s path and turn to the left of palace to Avahi gate). Worth staying 1h, very nice view/panorama, a lot less tourists than in Amber palace which makes it more appreciated. Please note, there are multiple board with “no tips allowed” if you have some unasked help/guide asking for it. Rs.50 is the entry fees and with camera additional Rs.40 will be charged.

Nahargarh is the smallest of the three forts is notable for its excellent views mainly on the Man Sagar Lake and the vast expanse of Jaipur. The fort also houses the (relatively) compact Madhavendra Bhawan palace, though its former grandeur is rapidly fading under a new layer of graffiti and pigeon droppings. Parts of the film Rang De Basanti were filmed in this fort. To go to the area where the “Pathshala” song was shot, take a left turn as soon as you enter the fort. An autorickshaw can be taken from the auto rickshaw stand in front of the Amber fort and a round trip will cost about Rs. 250. Entry fees is Rs.10 and Rs.35 for Madhavendra Bhawan.

The elephants thrills the audience on the colorful festival of Holi at Chaugan Stadium. Beautifully decorated elephants gather for royal processions, elephant polo matches, races etc. and Rajasthan folk music and dance performances are part of the festivities.

The sight of mighty jumbos striding majestically is a treat to watch. The mahavats or owners proudly decorate their elephants with bright colours, jhools (saddle cloth) and heavy jewellery. Female elephants are made to wear payals or anklets which tinkle as they walk. Prizes are given for the most beautifully decorated elephant. Even more exciting is the polo match, elephant race, elephant and tug of war between 19 men and women. Elephant Holi is being played on the most colorful elephant.

This festival is celebrated by the maidens and married women, and is dedicated to Gauri, the incarnation of Goddess Parvati, the consort of Lord Shiva. A Colourful procession is taken out from Zanana Deodhi of the City Palace, passing through Gangauri Bazar, Chaugan, Tripolia Bazar, and converging near Talkatora for two consecutive days.

Images of Isar and Gauri are made of clay for the festival. In some families, permanent wooden paintings are painted every year on the eve of the festival by eminent painters called Matherons. A distinct difference between the idols of Teej and Gangaur is that during the Teej Mahotsava, the idol will be under an umbrella while the Gangaur idol will not have an umbrella.

Women decorate their hands and feet by making designs with mehndi (marital paste). The figures drawn range from sun, moon and stars to simple flowers or geometric designs.

This festival marks the advent of monsoon, swings are hung from trees and decorated with flowers. Young girls sing songs of love and about rain. The festival is dedicated to Parvati, on the day she was united with Lord Shiva, a magnificent procession is taken out of the City Palace, just like the Gangaur procession for two consecutive days.

It is celebrated on 14 January, with traditional fervor every year, devotees take a holy dip in the holy pond at Galtaji, it has now also become a kite flying festival, which brings millions of colorful kites in the sky of Jaipur every day.

This festival is locally called as Basoda and is celebrated to ward off the dreaded disease of smallpox. The most famous fair is held at the Sheetala Mata temple in Chaksu (on the Jaipur Kota Road), and people gather here to pray and celebrate.

It is the donkeys day which is celebrated at Looniyawas near Sanganer, Thousands of donkeys from all over north India are brought here for buying and selling. The donkey races and sports are organised for the merriment of people. A rare sight indeed.