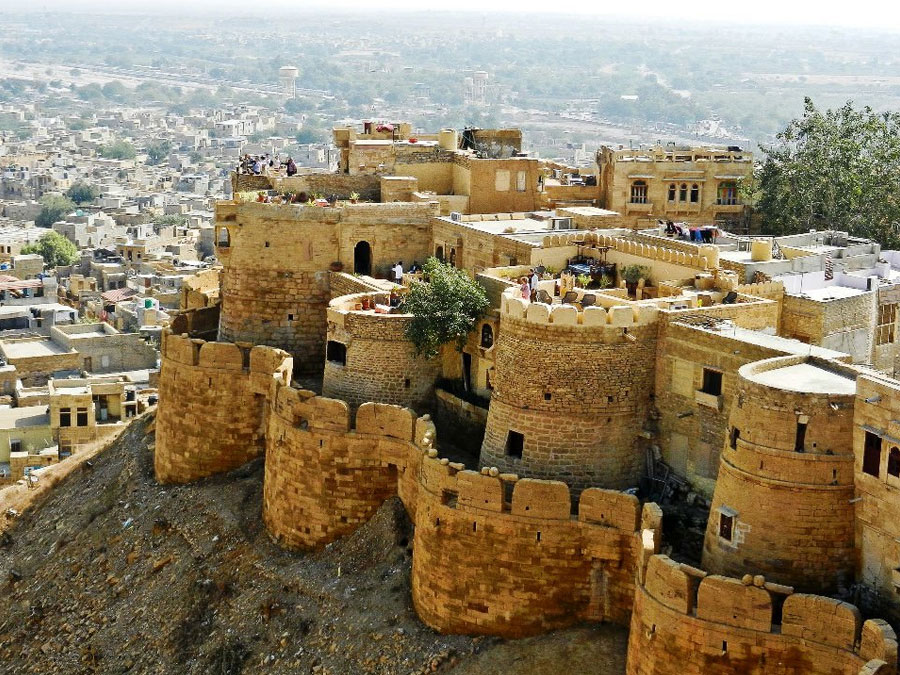 Jaisalmer (The Golden City), The Golden City is a town in Rajasthan. It is located 575 Kms from the state capital Jaipur. It was once known as the state of Jaisalmer. The city stands on a fort of yellow sandstone, made up of a fort, which houses a palace and several ornate Jain temples. Many houses and temples have fine sculptures. It is situated in the center of the Thar Desert and has a population of about 78,000. It is the administrative headquarters of Jaisalmer district.

Any resident of Jaisalmer is a Bhati Rajput, who takes his name from an ancestor named Bhatti, who was famous as a warrior when this tribe was based in Punjab. Shortly thereafter, this clan was driven south, and found refuge in the Indian desert, which was in his house. The Maharaja of Jaisalmer was a descendant of Jaitsingh, a ruler of the Bhati Rajput dynasty, though the famous prince Devaraja of the Bhati dynasty is revered as the founder of the Jaisalmer dynasty during the 9th century. With him the title of “Rawal” commenced which means “of the Royal house”. According to legend, Deoraj was to marry the daughter of a neighbouring chief. Deoraj’s father and 800 of his family and followers were surprised and massacred at the wedding. Deoraj escaped with the aid of a Brahmin yogi who disguised the prince as a fellow Brahmin. When confronted by the followers of the rival chief who hunted for Devaraja, the Brahmin convinced him that the man with him would be the second Brahmin to eat the same dish, no Brahmin pious person with a person of any other caste. Will do. Devaraja and the rest of his clan members were able to recover from the loss of so much that they later formed the stronghold of Derawar. Deoraj later captured Laudrava (located about 15 km to the south-east of Jaisalmer) from another Rajput clan and made it his capital.

Jaisalmer Fort is one of the largest forts in the world. It is situated in Jaisalmer city in the state of Rajasthan. It was built in 1156 AD by the Bhati Rajput ruler Rawal Jaisal from where it derives its name. The fort stands proudly amidst the golden parts of the great Thar Desert on Trikuta Hill, and has been the scene of many battles. Its massive yellow sandstone walls are the color of a lion during the day, fading to honey-gold as the sun, forming a fort in the yellow desert. For this reason, it is also known as The Golden Fort.

Evoking a vision of chivalry and valor, these havelis were built by wealthy merchants. Famous for their intricately- carved facades, the workmanship of Jaisalmer’s Havelis present a beautiful amalgam of Rajput architecture and Islamic art. Some of the famous havelis of Jaisalmer are:

Guman Chand Patwa (and later his five sons), a powerful businessman, belonged to the Oswal Jain community and banker who owned more than three hundred trading centers from Afghanistan to China. This ornate five-storey complex took fifty years to complete. It is the largest, most luxurious, and most elaborate of the Javelmer havelis.

The scheming Prime Minister Salam Singh built it in 1815. It has a beautifully arched roof with blue cupola and carved brackets in the form of peacocks.

It is built by a Prime Minister of princely state of Jaisalmer. Its facade is a riot of ornamentation: birds, elephants, flowers, a bicycle, soldiers, and even a steam engine.

The Vyas family built this beautiful Haveli Shreenath Palace – Hotel in Jaisalmer in the 15th century and the descendants of this family still live here. Srinath Palace – The hotel in Jaisalmer was once inhabited by the Prime Minister of Jaisalmer, and the guest is invited to stay in these rooms – only five are available for the hotel – and to enjoy this architectural treasure in the Vyas family. Join, and feel like a Maharaja for a few days. Some doors and ceilings are wonderful examples of old carved wood dating back many hundreds of years. Some doors have brass or iron fittings.

Sam dunes are the major attractions of Jaisalmer. It is 3 km long, 1 km wide, and is half a kilometer high. Sam Dunes are incredible and they are picturesque. Sam Dunes is just a place to surf the golden sands of Rajasthan through a safari.

Located at a distance of 40 km from Jaisalmer, Desert National park is a perfect example of unusual ecological biodiversity. Thar desert is teeming with wildlife and have some resident species which include Chinkara, black buck, wolf, Hare Desert fox, and desert cat.

The Desert Festival is one of the most popular cultural events on Rajasthan’s annual festival calendar. The colorful program is held in Jaisalmer every year in the months of January / February. This festival is a showcase of the arts and crafts of Rajasthan. The melodious tunes and rhythms of the folk musicians and amazing folk dance performances by renowned artists create a spellbound effect on spectators. The event is organized on the famous golden dunes at Sam near Jaisalmer. Colorful craft bazaars set up for the occasion are an added attraction of the festival.