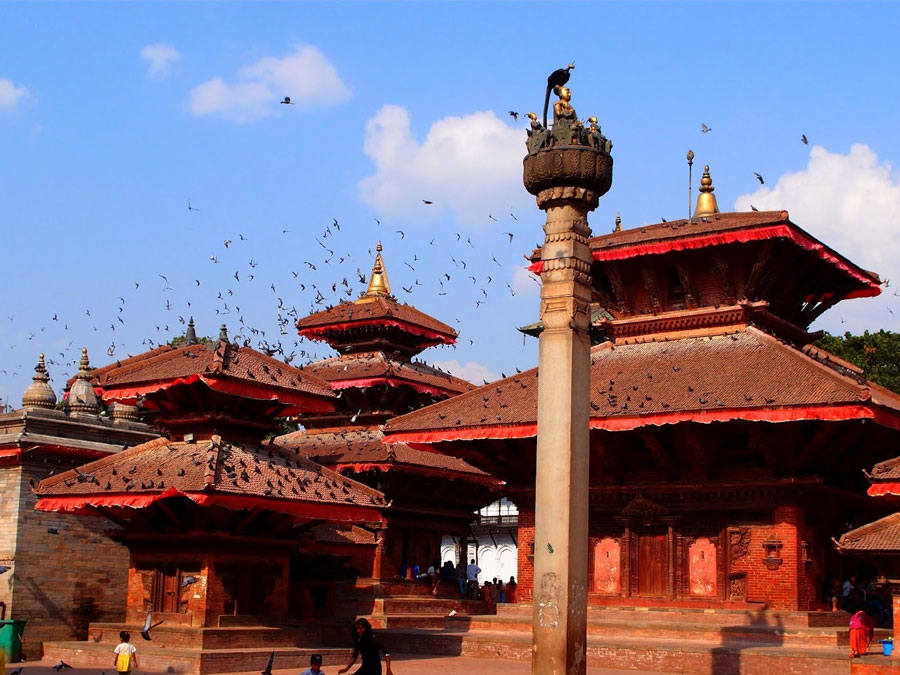 Kathmandu is the capital and the largest metropolitan city of Nepal having close to one million inhabitants. The city is the urban core of the Kathmandu Valley in the Himalayas, which contains two sister cities: Lalitpur Patan, 5 km to its south and Bhaktapur or Bhadgaon, 12 km to its east, and several smaller towns. Its acronym is ‘KTM’ and named ‘tri-city’. In the 2001 census, the city of Kathmandu had 671,846 inhabitants.

The city of Kathmandu, which is inseparable from the Kathmandu Valley, has been associated with ancient times. Archaeological explorations indicate that Kathmandu and two other sister towns in the valley were the oldest and that the period between 167 BCE and 1AD has been traced. The excavations at Hadigaon and Lubhu in the southern part of the valley in Kathmandu have brick walls and stone age tools. The Buddha was also born in 563 BC in the Kapilavastu district of Nepal near the Indian border.

Hanuman Dhoka is the royal palace of the Malla kings and Shah dynasty. It is spread over five acres. The eastern wing with ten courtyards is the oldest part dating back to the mid-16th century. It was expanded by King Pratap Malla with several temples in the 17th century. Both Sundari Chowk and Mohan Chowk are closed in the northern part of the palace. In 1768, in the south-east part of the palace, four lookout towers were added by Prithvi Narayan Shah. The royal family lived in this palace till 1886, where they shifted to Narayanhiti Palace. The stone inscription on the outside is in fifteen languages ​​and the legend states that if all 15 are read, milk will flow from the middle of the stone table.

Pashupatinath Temple is a famous Hindu Temple dedicated to Lord Shiva. It is located on the banks of the Bagmati River in the eastern part of Kathmandu and is the oldest Hindu temple in Kathmandu which is near to HARE RAM GHAR established by PT RAVI PRASAD GAUTAM IN 1929 for endless 24hrs hare Rama kirtan and was established in the 5th century, and served as the seat of national deity, Lord Pashupatinath, until Nepal was secularized. However, a significant part of the temple was destroyed by the Mughal invaders in the 14th century and there were few or no remnants of the original exterior of the 5th century. The temple that stands today was built in the 19th century, although the image of the bull and the four-headed image of Pashupati are at least 300 years old. The temple is listed on the UNESCO World Heritage Site list. Shivaratri or the night of Lord Shiva is the most important festival, attracting thousands of devotees and sages.

Boudhanath is among the holiest Buddhist sites in Nepal, including Swayambhu, and is one of the most popular tourist destinations in the Kathmandu region. It is known as Khāsti by Newars and as Bauddha or Buddha-nāth by modern speakers of Nepali. The huge mandala of the stupa, located about 11 km from the center and northeast outskirts of Kathmandu, makes it one of the largest circular stupas in Nepal. Boudhanath became a UNESCO World Heritage Site in 1979.

Swayambhu, also known as the Monkey Temple as holy monkeys are living in parts of the temple in the north-west, is among the oldest religious sites in Nepal. Although the site is considered Buddhist, the place is revered by both Buddhists and Hindus. Numerous kings, Hindu followers, are known to have paid their homage to the temple, including Pratap Malla, the powerful king of Kathmandu, who is responsible for the construction of the eastern stairway in the 17th century. According to the GopālarājavaṃśāvalīSwayambhu was founded by the great-grandfather of King Mānadeva (464–505 AD), King Vṛsadeva, about the beginning of the 5th century AD. This seems to be confirmed by a damaged stone inscription found at the site, which indicates that King Mānadeva ordered work done in 640 AD. However, Emperor Ashoka visited the site in the third century BC and built a temple on the hill, which was later destroyed. Legend has it that Buddha himself visited Swayambhu and taught there two hundred years ago.

The temple is one of the oldest Hindu temples in the valley and is believed to have been first constructed in the 4th century. Changu Narayan is the name of Vishnu, and the temple is dedicated to him. A stone slab in the vicinity of the temple dates to the 5th century and is the oldest stone inscription discovered in Nepal. It was rebuilt after the old temple was destroyed. There are many stone sculptures here of Licchavi period. Changu Narayan Temple is listed by UNESCO as a World Heritage Site.

Nepalese festivals follow the traditional, religious ‘lunar calendar’ in the same order. An exception is New Year’s Day, which always fails in mid-April, celebrated throughout Nepal as the first day of the official Nepali solar calendar, that is, the first day of Baisakh.

This is a four-day chariot festival held in honor of the White (Seto) Machchhendranath (to be distinguished from the Red (Rato) form of the same divinity in Patan), who is actually the Padmapani Lokeshwara, whose permanent shrine is situated at Janabahal in Key Role in the middle of the old bazaar in Kathmandu.