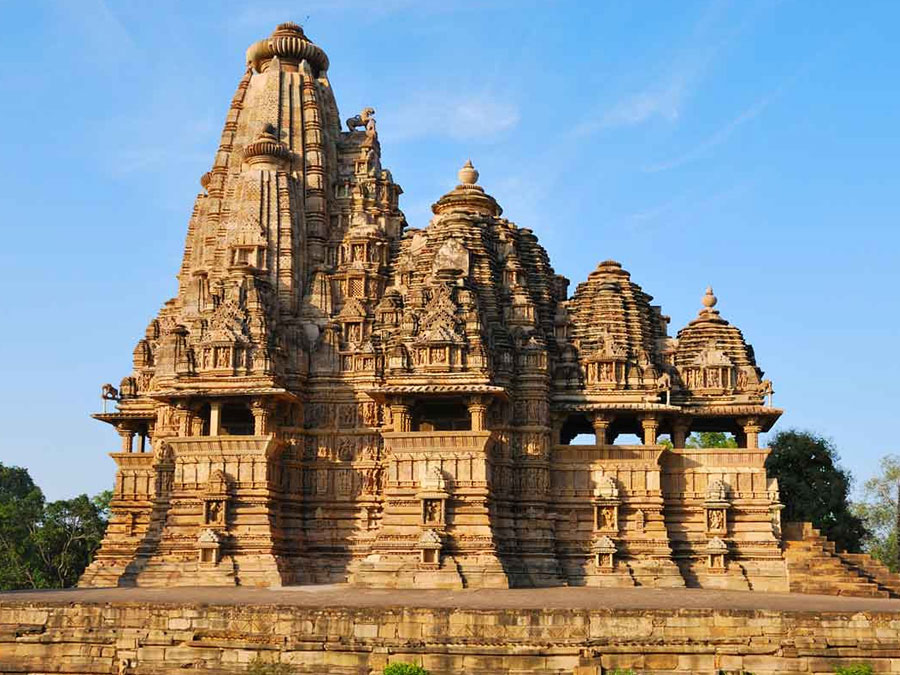 The temples are grouped into three geographical divisions: western, eastern and southern.

This is clearly the most important section of Khajuraho temples. It is here that you will find the biggest and most intricate temples of all. The Kandriya Mahadev which is dedicated to Lord Shiva is the largest temple in Khajuraho towering to a height of 31 m. In the Sanctum Sanctorum, there is a lingam. Do notice the ceilings and pillars of the temple that are magnificently carved. Other well-known temples in the group are Chausath Yogini Temple, Lakshmana Temple and Matangeshwar Temple. The Chandela Kings were Lord Vishnu’s ardent devotees, so you will find many temples dedicated to Lord Vishnu. The most important of them is the 9 feet high Boar statue- Varaha Temple

The eastern group consists mostly of Hindu and Jain temples. They are located close to the Khajuraho temple. The Parshvanath temple, which is the largest Jain temple, is the most magnificent structure in the group. There is another famous Jain temple in the Golai temple group. The paintings on the walls portray the lives of people from day to day. The three Hindu temples in the group are Brahma, Vamana, and Javari Temples.

The southern group is also known as Jain group of Temples. They are situated 5 km to the southeast of the town. Chaturbhuj Temple and Duladeo Temple are the most important of all. Chaturbhuj temple has a huge structure of Lord Vishnu inside the sanctum.

Khajuraho, is a small village situated in the Chhatarpur district of Madhya Pradesh. Due to the presence of world famous temples, this small village is one of the major tourist destinations of Madhya Pradesh. Tourists from far and wide to visit this place to see these temples, which in those days are known for highly artistic representation of human sexuality and magnificent temple architecture. Various cultural festivals associated with Khajuraho promote tourism in Madhya Pradesh.