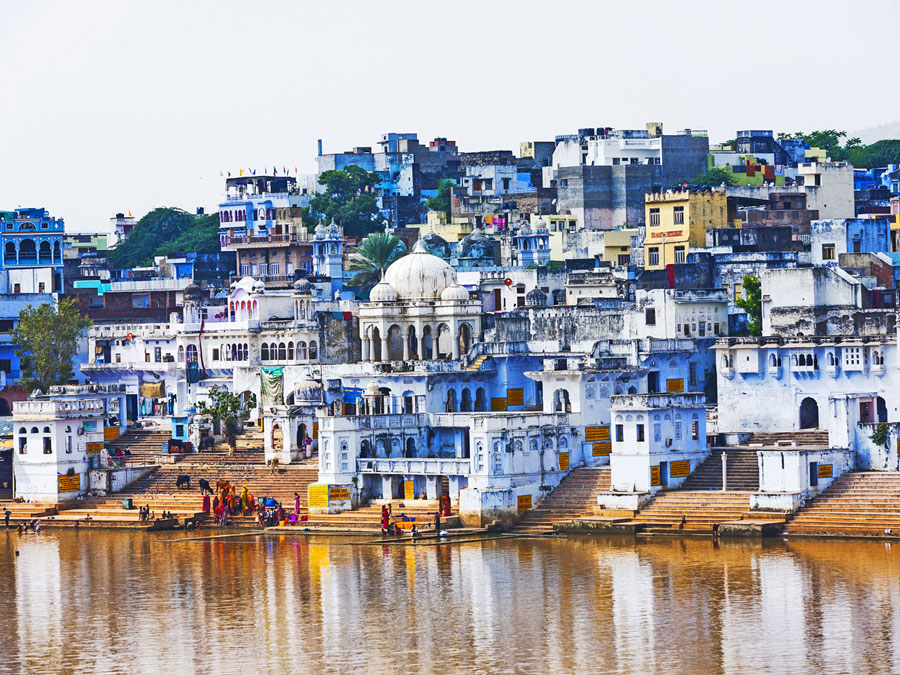 Pushkar (The Holy City) is a town in the Ajmer district in the state of Rajasthan, India. It is one of the five sacred dhams (pilgrimage sites for devout Hindus) and is situated at 14 km North West from Ajmer at an average elevation of 510 metres . It is often called “Tirth Raj” – the king of pilgrimage sites – and has in recent years become a popular destination for foreign tourists.

Pushkar is among the oldest cities of India. The date of its actual establishment is not known, but the legend associates Lord Brahma with its creation. It is mentioned that Brahma did penance here for 60,000 years to get a glimpse of Radha Krishna.

The Ramayana mentions Pushkar and says that Vishvamitra performed tapa here. It further says that the Apsara Menaka came to Pushkara to bathe in its sacred waters.

The Mahabharata says that while laying down a programme for Maharaja Yudhisthira travel, “Maharaja after entering the Jungles of Sind and crossing the small rivers on the way should bathe in Pushkara”. And, as per Vamana Purana, Prahlada on his pilgrimage to holy places visited Pushkarayana.

A Gurjara Pratihara (Gurjar) ruler of Mandore- Nahadarva, restored this shrine in the seventh century. He found the site and the lake was restored by creating an embankment on the banks of the Luni River. He rebuilt old palaces and built twelve dharamshalas (resting places) and ghats on three sides of the lake.

According to Rajputana Gazetteer Pushkar was held by Chechi Gurjars (Gujjars) till about 700 years ago. Later Some shrines were occupied by Kanphati Yogis. There are still priests from Gujar community in Pushkar temple, known as Bhopas.The sage Parasara is said to have been born here. His descendants, called Parasara Brahamanas, are found in Pushkar and the surrounding area. The famous temple of Jeenmata has been cared for by Parasara Brahmans for the last 1,000 years. Pushkarana Brahamanas may also have originated here.It is also the venue of the annual Pushkar Camel Fair. In 1901, the town was part of the had a population of 3,831.

Situated on the top of Ratnagiri hill, this temple is dedicated to Lord Brahma’s wife Savitri. The temple has a statue of Goddess Savitri.

You would find ample references of Vishnu in the Hindu myths and legends. In several incarnations which numbers up to as many as 10, Vishnu has appeared on the earth and saved the earth from the hand of the evil.

The temple has a remarkable historical past. Mughal emperor Aurangzeb destroyed many temples because he could not stand with the rather bizarre idol of human body with the head of a boar, housed in the temple.

Later he Maharaja of Jaipur- Sawai Jai Singh IIt reconstructed the temple. Lord Vishnu is seen as one of the Hindu trinity – Brahma, Vishnu and Maheswar. Vishnu represents the sustenance of creation while the other two gods represent creation and destruction.

Mahadeva Temple in Pushkar is dedicated to Lord Mahadeva. The god is one of the Hindu Trinity that represents Creation, Sustenance and Destruction. According to the Hindu Puranas, Lord Mahadeva is the god of destruction.

There are several myths and legends centering round Lord Mahadeva. Ash-smeared and clad in tiger Skin, He holds a Trishul in his hand and a bull is his pet. According to the legends, the river Ganges has been created from his locks of hair.

The main attraction of Pushkar is the Pushkar Lake which is considered as sacred as the Mansarovar Lake in Tibet. Pushkar has become a Hindu pilgrimage site due to this sacred lake. Legend has it that the lake was initiated to Lord Brahma, the creator of the universe, when a Lotus fell from his hand into a mule and a lake emerged at that place.

Pushkar becomes a bustling and colorful fair in the month of Kartik (October-November) when the annual Pushkar fair is held. The main attraction of the fair is the Camel Fair, the trade of camels. Camels are bought, sold, mounted on sand dunes and paraded, which offers a panoramic view. Camel, horse and donkey races are events that tourists love. The Pushkar Fair has become a major cultural event in the state of Rajasthan bringing together a large number of villagers from different parts of the state of Rajasthan who display their traditional wear and also make the evenings colorful and festive with music and dance.