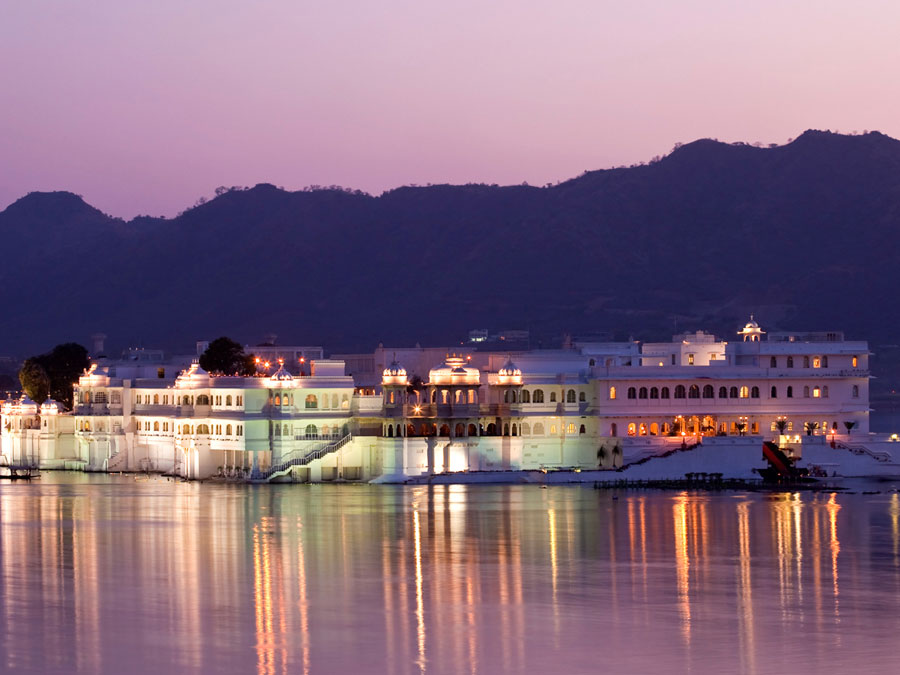 Udaipur is also known as the City of Lakes. It is a city of a Municipal Council and the administrative headquarters of the Udaipur district in the state of Rajasthan in western India. It is located 403 kms southwest of the state capital, Jaipur, 248 Kms west of Kota, and 250 Kms northeast from Ahmedabad. Udaipur is also the capital of the former princely state of Mewar and is a beautiful city in Rajasthan. It is famous for its lakes and palaces. A current tourist favorite, especially for up-market Westerners, it was a backdrop for several films, including the James Bond flick “Octopussy”.

Udaipur was the capital of the Rajput kingdom of Mewar, ruled by the Sisodia clan with jhala’s loyalty. The founder of Udaipur was Rana Udai Singh, the father of Maharana Pratap. The ancient capital of Mewar was Nagda, situated on the Banas River in the northeast of Udaipur. Legend has it that Maharana Udai Singh came on a hunt while hunting in the foothills of the Aravalli ranges. In 1568, the Mughal emperor Akbar captured Chittorgarh, and Uday Singh shifted the capital to his place of residence, which became the city of Udaipur. As the Mughal empire weakened, the Sisodia ranas, and later maharanas, reasserted their independence and recaptured most of Mewar district. Udaipur remained the capital of the state, which became a princely state of British India in 1818. After India’s Independence in 1947, the Maharaja of Udaipur acceded to the Government of India, and Mewar was integrated into India’s Rajasthan state.

Udaipur is among the popular tourist destination in India. Lakes, palaces and lively workspaces and culture attract foreign and domestic visitors. Standing on the eastern shore of Lake Pichola is a huge series of palaces built at different times since 1559. The palace’s balconies provide a panoramic view of the “Jag Niwas” (Lake Palace Hotel). They also have views of Jag Mandir on one side and the city of Udaipur on the other. The main entrance to go in it is through the triple-arched gate – the Tripolia which was built in 1725. The way now leads to a series of courtyards, overlapping partitions, terraces, corridors and gardens. There is a Suraj Gokhara, where the Maharanas of Mewar presented themselves to the people in times of trouble for the restoration of faith. The Mor-chowk (Peacock courtyard), gets its name from the mosaics in glass decorating its walls. The Chini Chitrashala is notable while a series of wall paintings of Krishna are displayed in Bhima Vilas. There are numerous other palaces such as Dilkhush mahal, Sheesh mahal, Krishna vilas, and Moti mahal – in memory of a princess of striking beauty who poisoned herself to avert a bloody battle for her hand by rival princes. Now the palace contains many antique articles, decorative furniture, utensils, and paintings and attracts thousands of visitors every day.The former guesthouse of the city palace, Shiv Niwas Palace and the Fateh Prakash Palace have been transformed into a heritage hotel.

Built in 1743–1746, the Lake Palace is made of marble and is located on Jag Niwas Island in Pichola Lake. It was originally built as a royal summer palace, but now it has been converted into a luxury 5-star hotel, operating under the banner “Taj Hotels Resorts and Palaces”.

Jag Mandir is another island in Pichola Lake which is known for its garden courtyard. Shah Jahan took refuge here, revolting against his father. The hotel has a restaurant run by HRH Group.

Monsoon Palace also known as Sajjan Garh Palace The summer resort of the Maharajas is atop a hill overlooking all of the lakes. This palace had a way to collect rainwater for consumption all year around.

Jagdish Temple is a large Hindu temple in the centre of Udaipur. It was built in 1651 AD by Maharana Jagat Singh I. It is an example of Indo-Aryan architecture and this temple is having a great example of architecture and art. This area  in the city is the main centre of attraction for the tourists. You can also find some special kind of things like rajasthani dress, paintings etc.

The temple is situated on a green hill in the Dewali area of ​​Udaipur. It has stairs and a sloping path to climb up, which is about 800 meters. Below this area lies the New Bohra Colony known as Burhani Nagar, and a new mosque is named Burhani Mosque. This area is very peaceful and is very near to Saheleion ki badi and Fateh Sager.

Fateh Sagar Lake is situated in the north of Lake Picholas. It was originally built by Maharaja Jai ​​Singh in the year 1678 AD, but was later rebuilt and expanded by Maharana Fateh Singh causing much destruction due to heavy rains. In 1993–1994, water from the lake disappeared, but in 2005 -2006, the lake regained its water.

Lake Pichola is a lake that has two islands, Jag Niwas and Jag Mandir. This lake is 4 km long and 3 km wide, originally built by Maharana Udai Singh II. There are many ghats, like bathing and washing ghats, which can be approached through boats from the City Palace of Udaipur (Bansi Ghat). In the center of the lake stands the Lake Palace, which has now been converted into a Heritage Palace Hotel. The lake remains quite shallow even during heavy rains, and dries easily in times of severe drought.

Sahelion ki Bari was for a group of forty-eight young female attendants who came to Udaipur with a princess as part of their dowry. The gardens set under the embankment of Fateh Sagar Lake have lotus pools, marble pavilions, and elephant-shaped fountains. These fountains are fed with lake water through ducts designed for this purpose.

A rose garden laid out by Maharaja Sajjan Singh is situated near the palace on the eastside of Lake Pichola. A library in the garden has a collection of ancient handwritten manuscripts and books. Some of the parts of the Satyarth Prakash have been written in this library. Styarth Prakash stupa is situated in Gulab Bagh. Within the garden, there is a zoo with tigers, leopards, Chinkara gazelle, birds, and many wild animals. Children can enjoy mini train, track of which covers the main part of the garden and the zoo.

This is a park situated in the middle of Fateh Sagar Lake. This park covers about 41 acres (170,000 m2), with flower gardens and a lily pond. It was inaugurated on the birth anniversary of the first Prime Minister of India, Jawaharlal Nehru. The garden overlooks the ancient Moti Mahal of Maharana Pratap and gives a view of the Aravalli hills on three sides.

Shilpgram Fair literally means “Craftsmen’s Village” and is a living ethnographic museum depicting the huge diversity in crafts, arts, and culture between the different Indian states, but mainly exquisite terracotta works in dark red and dark brown sand material with wood carvings. Are the main forte of his ethnic village.

The Mewar Festival is celebrated to welcome the arrival of spring. It coincides with the festival of Gangaur in Udaipur, and has a unique charm about it. Female folk gather to collect images of Isar and Gangaur and then take them to a ceremony in different parts of the city.