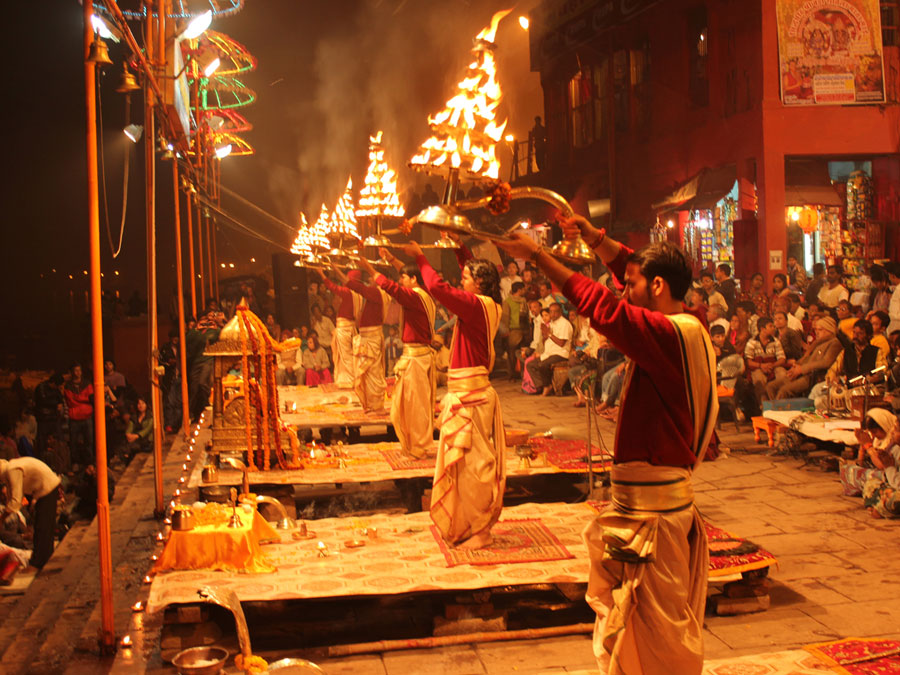 Varanasi is a city situated on the banks of the River Ganges in the Indian state of Uttar Pradesh, 320 Kms southeast of state capital Lucknow. It is regarded as a holy city by Hindus, Buddhists, and Jains. It is one of the oldest continuously inhabited cities in the world and probably the oldest in India.

The city was founded several thousand years ago by the Hindu deity, Lord Shiva, thus making it one of the most important pilgrimage sites in the country. It is one of the seven holy cities of Hindus. The city is mentioned in many Hindu scriptures including the Rigveda, Skanda Purana, Ramayana and Mahabharata.

Varanasi is generally believed to be about several thousand years old. Varanasi was an industrial center famous for its muslin and silk fabrics, perfumes, ivory works, and sculpture. At the time of Gautama Buddha (born 567 BCE), Varanasi was the capital of the Kashi kingdom. The famous Chinese traveler Xuanzang believed that the city was the center of religious and artistic activities and it was spread about 5 km on the western side of the Ganges.

Jantar Mantar is an observatory built by Maharaja Jai ​​Singh of Jaipur, located close to Dashashwamedh Ghat in 1737, which overlooks the Gangetic Ghats. Jai Singh was a great admirer of science and technology and he was particularly passionate about astronomy. He sent scholars abroad to study foreign observatories before construction (of observatories) began. Astronomers return with several manuals on astronomy. Jantar Mantar in Varanasi was built in line with the Delhi, Mathura, Ujjain and Jaipur observatories.

Bharat Kala Bhavan which is located inside the BHU campus, is an art and architecture museum and houses a large collection of paintings, Hindu and Buddhist sculptures and other materials of archaeological importance. Bharat Kala Bhavan was established by Raj Krishna in 1920 AD. In the main hall of Bharat Kala Bhavan, there is a portrait of a man with one leg and one hand on his hip and one hand carrying a weight of stone above his head. The figure of Lord Krishna has been raised by lifting the Govardhan mountain. Several paintings in the Bharat Kala Bhavan confirm the existence of Krishna cult in Kashi in the 15th and 16th centuries.

Ramnagar Fort is located about 14 km away from Varanasi and is situated on the opposite bank of the Ganges River. It is the ancestral home of the Maharaja of Benares. Maharaja Balwant Singh built this fort-palace in the eighteenth century. The fort is built in red sandstone. The Ramnagar Fort has a temple and a museum within the grounds and the temple is dedicated to Veda Vyas, who wrote the great Indian epic Mahabharata. According to legends Ved Vyas stayed here for some time.

A festive experience like none other awaits you at Ganga Festival at Varanasi.

The holy day celebrated in the month of November-December is when the ghats of Varanasi come alive with thousands of bright light lamps.

This festival is celebrated with great pomp in Sarnath. Lord Buddha was born on this day. A big fair is held at Sarnath and the remains of the Buddha are taken out in a procession for public viewing on this day. Buddha Purnima is celebrated during the month of May.